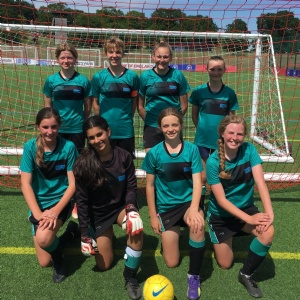 Our Under 13 girls team headed to the home of English football, St. George’s Park in mid-June as ISFA Regional Champions following an outstanding performance at Forest School a couple of weeks previously.

They arrived knowing that the other eleven teams were the pinnacle of girls football across England and were in a group containing schools from Cheshire, Lancashire, Surrey, Warwickshire and Central London.

The day got off to a fantastic start with two wins from two to begin the competition. A narrow defeat in game three was followed by a resounding 3-0 victory in the fourth group game. As teachers we always look at resilience as a fundamental skill in our sportspeople and the way the girls reacted to their first setback in a long time was wonderful to see. Another narrow defeat in game five meant that the girls qualified in second place and would face Surbiton High in the semi-final, the recent winners of the Under 13 National Cup. Despite playing well for long periods of the game, Surbiton were deserved winners which meant our exhausted team had to lift themselves for a 3rd/4th place playoff. This was another tight game which ended in a 2-2 draw leaving the Stephen Perse Foundation Under 13 Girls 7-a-side team as joint third best team in the country.

This is the greatest result achieved by a sports team in the history of Stephen Perse and we are extremely proud of an exceptionally talented group of girls who remain modest and have a real desire to improve. It also bodes well for the future that half of the squad were under 12 students so are available for selection in the competition next year.

Congratulations to Lottie K, Sophie J, Beatrice W, Hettie P, Alice E, Mya D, Natalie G and Juliet R. A mention too for Bella W who was a part of the regional championship winning team, but missed out on St. George’s Park due to injury.