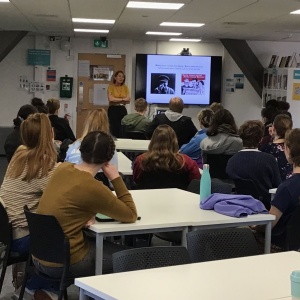 Clips from two films were shown; Circus 1936 and Radiant Path 1940 (a Soviet remake of Cinderella) directed by Grigorii Aleksandrov to showcase Soviet glory, borrowing ideas from the new and emerging Hollywood studios. While American films tended to focus on capitalism (Gold Diggers 1933 Warner Bros), the Soviets chose to focus on the glories of socialism. These films were juxtaposed to reflect the politics and economics of the era. This encouraged the Historians to understand the mediums used in the 1930s to transmit a political message to the masses and the students were able to appreciate that it offered entertainment as well as propaganda to Russia citizens, playing a very important part in the creation of Soviet identity under Stalin.

This was a fascinating talk which enriched and enhanced the student understanding of Russian history aligning nicely with the different History courses offered by the department.