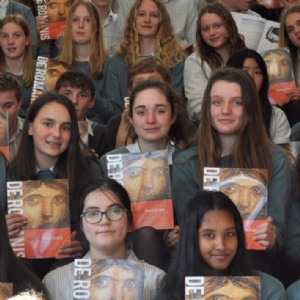 de Romanis is centred around stories from the Roman world: Book 1 focusses on stories about the Roman gods, heros and Roman religion; Book 2 explores the stories of the most significant men and women who shaped Roman history.

The team of authors - Katharine Radice, Angela Cheetham, Sonya Kirk and George Lord - met as Classics teachers at the Stephen Perse Foundation, a family of independent schools based in Cambridge and Saffron Walden. Their new Latin course is aimed at Key Stage 3 students and it
is the first major new Latin course to be published for over 40 years.

Published by Bloomsbury Academic in paperback, the course offers an introduction to both the Latin language and the cultural world of the Romans. The course aims to build knowledge of the ancient world, inspire students with an interest in the past and develop English literacy skills through two- way translation exercises, which promote the understanding of English as well as Latin. Its structure has been designed to facilitate Classics teaching in a broad range of schools: students learn from a core set of language materials, which can be supplemented to suit time, age and interest by a wide range of additional material such as primary source analysis, background discussion questions, and a range of additional language materials.

The project has been led by Katharine Radice, Curriculum Leader for Classics at Stephen Perse since 2015. Katharine is a regular speaker at Classics conferences on the methodology of effective Latin teaching, and one of many teachers at Stephen Perse schools who have an influence on course direction and content by publishing new and updated texts.

Katharine said: we are delighted to see this course in fully published form. We hope that it will help foster Latin teaching in schools today, by offering a set of resources which are fully up to date and flexible enough to work in a range of school environments. We have trialled the materials in Latin classes in North Cambridge Academy and Parkside Community College and we are confident that they will suit schools in both sectors, whether Latin is taught within the curriculum or as an add-on.