The Festival of Learning - The Global Planet Authority 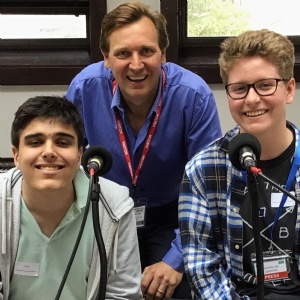 Mr Angus Forbes is a businessman and philanthropist. He spends a lot of time talking with the younger generation to inspire them to make a change and a difference and to prove that they are very capable. He is one of the public supporters of the GPA (Global Planet Authority). The main focus of the GPA is to protect and improve the biosphere.

Forbes spoke largely about the problems on earth, such as the tropospheric ozone levels increasing due to the production of chemicals that are being emitted like nitrogen oxides, some organic compounds and CO2. He briefly spoke about topsoil and the nitrogen cycle being 40%. An important point he passed across was the fact that there were certain causes of us failing the world. He mentioned three main causes, the first being that no one’s in charge. He used an analogy of a carrot and a stick. If there is no one to take control and be in charge of the carrot, then there is ‘no carrot and no stick’. Secondly, Forbes addressed that we have no boundaries. There are no rules set and no guides to follow on how to improve the world and give it a better chance of still being here in a couple of years. Forbes claimed it to be ‘like playing a netball match without a referee, without lines or without a coach. It would be a match full of chaos’. His final main point was that we have the money to make the difference, but it isn’t aimed at the right things.

Before the GPA talk, we spoke to a few people asking them what they were looking forward to today. They spoke about how it’s good that the school has a day with experienced speakers to inform young minds about the current problems and how each person can change small things in their day to day lives to make a bigger difference in the long run. The GPA talk inspired quite a few Year 10 and Year 12 students. A few anonymous Year 10s learned that they were destroying the planet over a period of time, they also learned about what they have to do to make a change. Multiple people had the same idea of using reusable plastics and paper rather than things that will be wrongfully separated. In this way, a large aim of the Festival of Learning - to help raise awareness - has been achieved. Students have been inspired and motivated to change their actions to help the planet and their community, which will impact the environment for the better.